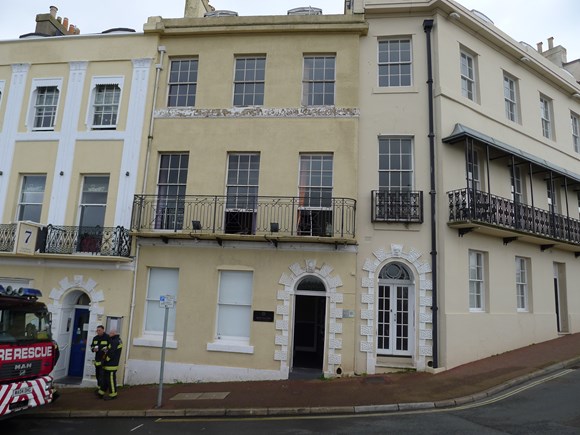 On Monday 24 January, at Plymouth Magistrates Court, Mr Phillip Hunt and his company Au Bord De La Mer were successfully prosecuted for failing to put in place suitable fire safety measures in the property 8 Beacon Terrace, Torquay (pictured) and ordered to pay £12,800 and pay £10,000 in legal costs to Devon and Somerset Fire and Rescue Service.

Following a fire at the four-storey property, consisting of separate flats leased out to tenants by Mr Hunt’s company, the fire service completed an investigation. Inspectors identified a number of serious fire safety failures by Mr Hunt under the Regulatory Reform (Fire Safety) Order 2005.

In summing up at the court this week, the judge made specific reference to the premises as a ‘tragedy waiting to happen.’

Devon and Somerset Fire and Rescue Service welcomes the outcome of the trial. It sends a clear message to the business community that fire safety legislation duties must not be ignored.

A fire started at 8 Beacon Terrace, Torquay on 9 March 2020, at 8.30am. On our arrival, we discovered a fire on the first floor and we were informed that people may still be inside. Firefighters tackled the blaze and searched for missing people. Smoke and debris from the fire entered the stairway, that was the means of escape in case of fire. The crew dealt with a fire in the kitchen and supported one occupant to escape. The occupant required oxygen therapy due to smoke inhalation.

At the scene, the firefighters noted that despite there having been a fire and a large amount of smoke, the fire alarm never sounded. Also, the door to the flat was not fitted with any type of self-closing device which would have prevented the rapid spread of the fire and smoke.

As a result of what had been seen, fire service fire safety enforcement officers inspected the premises for appropriate fire safety provisions.

Following a thorough investigation the fire service identified that:

In November 2021, Au Bord De La Mer and Mr Phillip Hunt were charged with serious breaches of fire safety legislation and pleaded guilty to a total of eleven charges. The judge decided due to the seriousness of the charges and a possible custodial sentence the case should go to Crown Court for sentencing.

The case was heard at Plymouth Crown Court on 24 January 2022.

In summing up, Judge Linford said:

“No basic steps have been taken to ensure that the occupants of 8 Beacon Terrace would be reasonably safe in the event of a fire. There was no testing of the fire alarm, emergency lighting and no fire risk assessment had been done”.

“There was scant regard paid to anything that was needed. If this fire had happened at night then there would likely have been fatalities”.

Mr Hunt knew that he was not able to manage the fire safety but did nothing. It was not the responsibility of the leaseholders to make the premises safe, it was Mr Hunt's”.

“There’s no excuse for leaving people’s safety to chance, especially when information is so readily available to those with responsibility for safety in buildings to understand what their duties are and ensure they comply with the law.”.

Mr Smith went on to say: “I cannot emphasise enough the importance of carrying out a suitable and sufficient fire risk assessment and having the appropriate fire safety measures in place. It is extremely fortunate that the fire occurred during the day when most of the occupants were out. Had the fire started at a time when people were asleep, the outcome could have been very different.”

Devon and Somerset Fire and Rescue Service takes the safety of people that live, work and visit Devon and Somerset very seriously. Where those responsible for the safety of others fail to carry out their duties and those failures put lives at risk the Service will take all necessary action to ensure the matters are dealt with appropriately. The Service only takes legal action in the courts where it identifies failures so serious that there has been a significant risk to people’s safety.

Get support on fire safety for your business