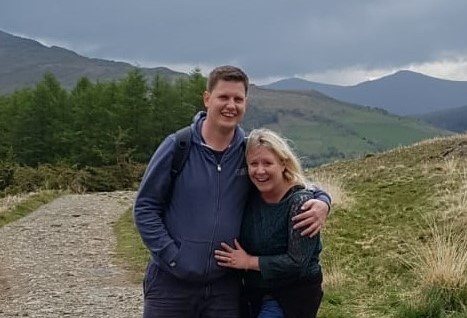 Emma and her partner Robert

For LGBT+ history month, Emma gives her point of view from the perspective of being a supportive ally. Emma is chair of our Fire Pride and Allies group.

I wasn’t going to share anything personal for LGBT+ History Month. Not because I feel it isn’t important but because I felt I couldn’t offer anything, and it isn’t about me.

I don’t have any personal experiences of what it is like to ‘come out’, or what it feels like to have to hide who I am or to pretend to be something I’m not.

I don’t know what it feels like to have comments directed at me just because I’m being myself and holding hands with my partner. What it feels like to walk in somewhere new and introduce myself not knowing whether I can be honest about who I am or to have to judge who I’m speaking to will accept me for who I am.

Or what it feels like to have to pretend to neighbours that I’m living with a flatmate. To go abroad and have to think about whether it’s accepted culturally or legally to be ‘out’ and even if it is legal, is it really ok? What it feels like to love someone and not be able to marry them.

When I think back to when I was at school, I don’t remember anyone being gay, or lesbian, and definitely not trans. I didn’t think anything of it. I don’t even think I had any conversations about LGBTQ+ people. Now, when I reflect on it, I think it’s strange. Not that we didn’t talk about it but that I didn’t know anyone who was LGBTQ+. Actually, I probably did know plenty of people who were.

One of the reasons LGBT+ History Month is in February is because in 2003 a law, Section 28 was abolished. The law was introduced in 1988 and was designed to stop local authorities, including schools and councils, from promoting homosexuality. The thoughts were from the government at the time that: "Children who need to be taught to respect traditional moral values are being taught that they have an inalienable right to be gay. All of those children are being cheated of a sound start in life."

Is that the reason that nobody spoke about it? Teachers couldn’t discuss it, lessons would have been only about heterosexual relationships and sex, and as I still hear now, ‘normal’ relationships. On top of that, it was the 90s, and my parents, teachers, and adults would all have witnessed the Aids epidemic in the 1980s and the stigma of it being a gay man’s disease. Why would anyone admit to being LGBTQ+?

So when I say I don’t think I have anything to offer, maybe that isn’t true. I can see how much fighting has been going on for the rights of LGBTQ+ people. I can see how much inequality still exists, laws that are ever slowly being changed, and how much there is still to achieve.

What I can offer as the chair of the Fire Pride and Allies group, and why I decided to share my thoughts, is honesty about my privileges as a heterosexual, white woman. A commitment to support my colleagues whoever they are, to listen to them so we can all be who we are. It’s our right and what we all deserve.

Fire Pride and Allies is a significant staff network, supporting the Service with Equalities and Diversity and ensuring that our work environment is safe and inclusive.

Looking after our people